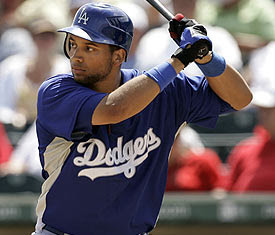 I have good news for L.A. Dodger fans as well as any fantasy owners looking for some pop.

James Loney has been inserted into the regular starting lineup with Nomar Garciaparra being moved across the diamond to third. It's unclear how the latter move will play out, but the 23-year-old Loney has broken out in the month of June with his sudden abundance of at-bats in L.A.

At the time of this post, the Dodgers are back in first place in the N.L. West, thanks in large part to Loney's 3-hit hit night in Arizona. After spending the season' first two months with Triple-A Las Vegas (where he hit .380 last season) , Loney is back with the big club and picking up where he left off last season.

In 2006, the lefty hit .284 with 4 homers and 18 RBIs in 48 games. He also set a National League rookie record and tied the Dodgers' franchise record with a career-high 9 RBI against the Rockies last September. Loney is batting .471 in 2007 as he looks to stick with Grady Little's club. He's put together a 5-game hit streak, which includes four multi-hit efforts, three doubles, two triples and a pair of long-balls ... Not bad.

Anyway, while I'm sure many fans wondered aloud why this opportunity took so long for James Loney (including my dear friend and lifelong Dodger fan dating back to the team's Brooklyn days, Stanley Kaplan), the fact is: He's up now ... so don't sleep and go get him.