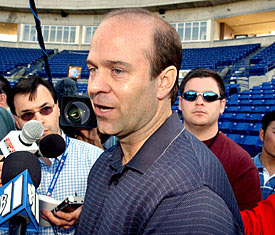 The Fantasy Flash would like to send a special shout-out to Jim Duquette, the Vice President of Baseball Operations for the Baltimore Orioles.

Last week, I travelled home to New York City for a behind-the-scenes tour of Yankee Stadium when the O's were in town. Mr. Duquette took the time to be interviewed by the Flash, and I just wanted to thank him for adding some legitimacy to my operation. 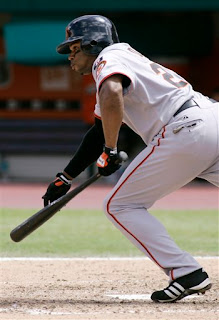 The Pirates and Giants completed an unheralded trade at the deadline which sent Matt Morris to Pittsburgh in exchange for a speedy outfielder named Rajai Davis.

The trade wasn't talked about much because it was between two bad teams. We know about Morris. He's a better real player than he is in terms of fantasy baseball. He's got grit. He can get you wins, but his stat lines can kill a fantasy owner (7-8, 4.51 ERA, 1.50 WHIP this season).

Davis is an interesting player though. He doesn't have a ton of power, but after having watched him a bit more in San Francisco, it's clear that the rookie's wheels will be his biggest asset.

It seems like the centerfield job is his to lose with the Giants, after Davis had to battle with the likes of Nate McClouth and Chris Duffy (not household names) in Pittsburgh. Randy Winn and Dave Roberts are still in the Bay Area, but Davis is the youngest and most exciting of the three - especially considering that the Giants are out of it and will likely be evaluating their young talent for the rest of 2007.

Davis looks like a one-dimensional base stealer right now, with 14 SB and only 6 RBI this season. But 9 of those steals have come in the month of August, and if the Giants add any kind of offense by next season, Davis could turn out to be a high-run total guy as well as a good hitter for average (hitting .304 as of now).

So if you're desperate for speed coming down the stretch, Davis could be the answer. But next season, he might be a real sleeper if you're late in a draft without much speed on your roster.

AA
Posted by Ariel Agami at 8:38 PM No comments: 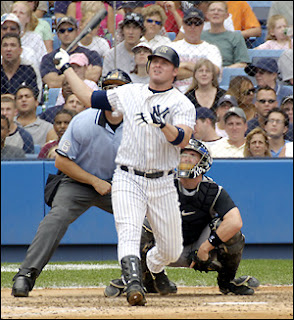 ... that Jason Giambi is back to mashing in the Bronx. I know you may think my New York bias is the reason I recommended him in my most recent tip of the week. But really, he's a just a damn good hitter.

The guy belted a pair of long balls in Friday's win over the Tigers and he has 4 total since returning from the disabled list earlier this month. But what I've noticed about him is that his timing at the plate is amazing for someone who'd been out of action since the end of May.

Giambi has surely been flying off waiver wires in A.L. Onlyleagues since coming back, but he's proving to be a viable option in mixed leagues as well. Giambi still has a ton of power and that great batter's eye - plus, he's in the middle of a Yankee lineup that has been almost unstoppable since the All-Star break.

He may not play every day, but four starts in a week for Jason Giambi can easily be as good as 6 or 7 for someone else you might plug into.

Long story short: If he's available in your league, he shouldn't be.

AA
Posted by Ariel Agami at 8:01 PM No comments:

Yeah so my boy Wang ... 2.2 IP, 9 hits and a career-high 8 runs allowed in Toronto tonight. Out of my frustration for making me look bad right after singing his praises, I'm posting a pitcure that paints him in somewhat of a bad light. This hurts me more than it hurts you, Chien-Ming! 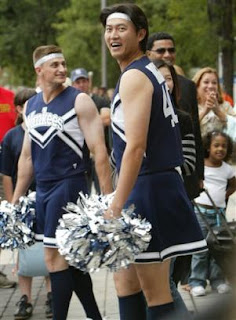 I'll tell you what: Chien-Ming Wang is a pretty darn good pitcher. This guy just wracks up wins. 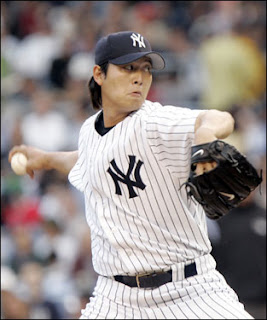 From a purely fantasy perspective, the problem with the 27-year-old righty is that he doesn't strike a lot of guys out. Heading into tonight's start against Roy Halladay and the Blue Jays, Wang has only 64 K's in nearly 137 innings pitched. But remember, strikeouts are only one category, so if you have a staff that can accumulate strikeouts elsewhere, Wang is the perfect compliment because he's a lock for 15-20 wins, a good ERA and a low WHIP. In fact, his current numbers (13-5, 3.49 ERA, 1.24 WHIP) would look a lot better if it wasn't for a pair of below-average starts against the Orioles.

Wang throws a very good sinker along with a slider and change-up. But his fastball, which I think is pretty underrated, hits the mid-90s often. He' just a consistent pitcher who commands the strike zone, and doesn't give up walks and homeruns.

Further, he uses that great sinker - and it is GREAT - to produce the all-important double play (He's among the league leaders with 21 GDP this season). Wang's efficiency often allows him to maintain a low pitch count and go deep into games, which makes him even more valuable if you have any kind of innings pitched incentive in your leagues.

So in closing, I advise you to keep a close on Chien-Ming Wang in the coming seasons. He strikes me as one of these guys who will go under the radar because he's not a high-profile power pitcher like a Johan Santana, a Roy Oswalt, or even an Erik Bedard, who has been amazing this season. Wang may not be in that category quite yet, but he will always be surrounded by a good offense in New York and his arm is more apt to stay healthy with that relaxed motion, which always seems to extend a pitcher's shelf-life, a la Pedro Martinez and Mariano Rivera.

This guy will be a regular in Cy Young races and a fantasy baseball staple for years to come. Hopefully he beats Halladay tonight. That'll make me look good.

AA
Posted by Ariel Agami at 1:52 PM No comments: